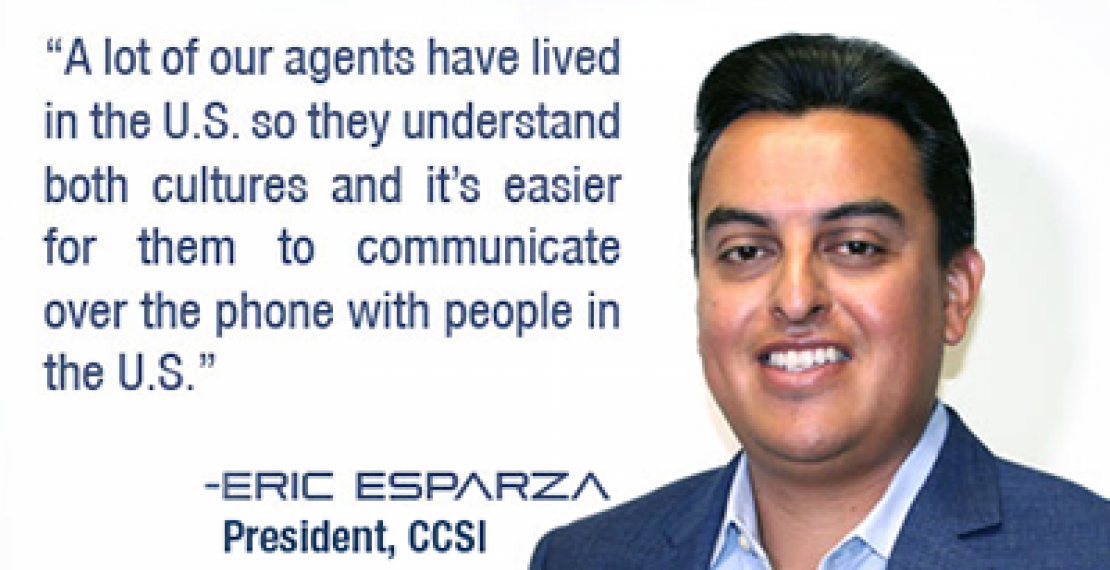 Henry Monterroso is just one of an entire generation of Mexican-Americans who grew up in the United States but were eventually deported back to their land of birth. Yet while some become entrapped in poverty or even fall into a life of crime upon returning to Mexico, Monterroso has persevered after finding work at a Tijuana call center.
Utilizing his first-hand knowledge of the English language and American working culture as supervisor for a client in the legal industry, he has prospered alongside the other deportees who make up 60% of the work force at Call Center Services International (CCSI).
"We entered the United States in 1984 when I was five years old," he told Nearshore Americas. "We came to find employment opportunities, stability and long-term security for my family. There was an amnesty at the time for Mexicans who were coming over and looking for a new life in California."

Monterroso grew up in San Diego speaking both English and Spanish but on June 11, 2011 his life changed forever. As the result of missing an immigration appointment when he was just 13 years old, he was eventually forced to leave the United States. This meant leaving behind his mom, originally from La Paz, Baja California, and his dad, a Guadalajara native, who had settled in San Diego under former President Ronald Reagan's amnesty program. Heartbreakingly, it also meant being separated from his son, who has just turned 12 years old.

"I did everything for my son and he was the center of my life but now I only see him maybe five times a year. It's the hardest experience I've ever faced in my 35 years," Monterroso said.

Nonetheless, Monterroso was determined to make the best of the situation and put his skills to use in the Tijauana labor market. "I come from real estate but that doesn't really mean anything here because you need Mexican certifications and you need to know people in order to find employment," he said. "Then I saw that there were opportunities for English-speakers in call centers here in Tijuana for bicultural people with a high-school diploma and zero criminal background."

Monterroso passed the rigorous training program at CCSI, where employees of his background are highly valued for their ability to serve clients in the United States. "We're bicultural, we speak English and we understand American culture. It is our culture really. We celebrate holidays like the Fourth of July and Thanksgiving etc. and you just feel very comfortable in this atmosphere," he said. At work, "you speak with people that are going through the struggles that you went through when you were over there and you continue to feel very American. I work [on behalf of] a law firm and when there are people telling me, 'I'm on unemployment, I'm on social security disability,' I understand it because I have friends and family members like that. So we do what we can to help them out."

Founded in Tijuana in 2007, CCSI has 250 agents and specializes in debt collection, customer service, sales, order processing and BPO, as well as administrative services for companies seeking to set up facilities in Tijuana. The company targets deportees through a recruitment program in conjunction with the Mexican immigration authorities who provide criminal background checks, CCSI President Eric Esparza told Nearshore Americas.

"Unfortunately, deportees with criminal backgrounds cannot be hired by CCSI due to the sensitive information we manage," Esparza said. CCSI's employees "aren't people with CRIMINAL RECORDS. A lot of them crossed into the United States as children and they grew up there. They've never been able to get papers and have a legal status in the U.S.," he added.

President Barack Obama recently signed an executive order that could help up to five million undocumented immigrants to stay in the United States legally. Yet Esparza insists that this will not have a negative impact on CCSI's recruitment model: "The deportation program is something that we're taking advantage of but it's not our only pool of labor. Tijuana is home to a lot of well educated 25- to 35-year-olds so I don't think we're at any risk of losing quality personnel."

CCSI's clients include the law firm Patenaude & Felix and the customer service company Why Not Lease It. "All of our clients are U.S.-based and they love not only the lower labor costs but also the quality of the agents on the phone," Esparza explained. "A lot of the agents have lived in the U.S. for a long time so they understand both cultures and it's a lot easier for them to communicate over the phone with people in the U.S.," said Esparza, who was born in Tijuana, raised on both sides of the border and lives in San Diego. Direct access to this bicultural labor pool is a "huge advantage we have over anywhere else in Mexico, Latin America or the rest of the world for that matter," he added.

For Esparza, identifying people with the right background is more important than finding agents with prior experience in call centers. "One of the things that we really focus on in our training program is to get quality personnel from the ground up," he said. "We would much rather take a person who's never been on the phone and train them to our client's specific needs than to get somebody who's had three or four years of experience because those people usually already come with tendencies of their own that may not fit our clients' needs."

There is an element of corporate social responsibility to CCSI's recruitment practices, Esparza said: "We want to help people. We create these jobs not only to benefit ourselves but also to create jobs for the Mexican people. We care about these people, they're our families ... and if we can give them an opportunity grow, then better for them and us. We always like to promote from within our company so we look to our employees first before we look outside our company."

One man who has benefitted from these practices is Agustin Pedraza, who in 1990 immigrated to the United States as a young boy with his single mother in search of better opportunities. "I grew up close to L.A. County and after I finished high school I was able to establish my life over there, or at least that's what I thought," he told Nearshore Americas. "But in April 2009 I was involved in a traffic violation that led to a court hearing with immigration involvement. Eventually I lost my case and found myself with a removal request."

Pedraza continued: "Shortly after arriving in Mexico in 2009 I found this great opportunity at CCSI. Even though it was an entry-level position, and I didn't know much about what my opportunities would be, they gave me an opportunity and I embraced it. I then kept growing within the company as it kept getting bigger and better."

Having since risen to the rank of Training and Development Manager, he noted that "one of the things that I like is that I get to take the American culture and the language and apply it to my everyday life." Despite the disruption to his life that resulted from being deported, Pedraza is thankful for the opportunities that have come his way in his new home. "To be honest, Tijuana and this whole 'second opportunity,' as I call it, has been a blessing in disguise," he said. "I was able to take the best of both worlds and I found my wife here and we had a wonderful wedding and we're planning on having a family."

With its warm weather, popular tourist resorts and renowned cuisine, Esparza believes that Baja California is an attractive location that can develop into a booming market and eventually lessen the need for Mexicans to migrate to the United States.

"I think people are interested to know how we can create more jobs on the Mexican side of the border so that we have fewer immigration issues," he said. "I don't think we'll ever get to the point where we're going to match salaries in the U.S. dollar for dollar, but Mexican people just want to live comfortably and if you really understand the Mexican culture it's not all about the MONEY. They want to live comfortably and provide for their families but a lot of [those in the United States] will return home after 20 or 30 years because they've saved enough money back home that they can either start their own business or retire."

Although Tijuana and Baja California has always been considered more of a manufacturing hub, it is also home to a considerable call center industry. There are approximately 60 call centers in the Tijuana area and the wider Baja California region is home to around 10,000 of Mexico's estimated 85,000 call center agents, according to Jorge Oros, CCSI's VP of Operations and the President of the Baja Call Center Cluster.

Beyond Tijuana, Esparza revealed that CCSI is looking to expand its operations to the nearby border city of Mexicali in the coming months. "We recently acquired a client who is asking for Chinese-language services in order to sell their product which is partly focused on the Chinese market," he explained. "We understand that Mexicali has quite a large community of Chinese-speaking members. It's not going to be a massive operation but it certainly could grow to a couple of hundred people." Further south, the famous resort of Cabo San Lucas is also in their plans. "It's already a town that's focused on customer service and they cater to Europeans and Americans and many different cultures and languages so we've explored the idea of moving down there. But we've really got to do our due diligence before then," Esparza said.